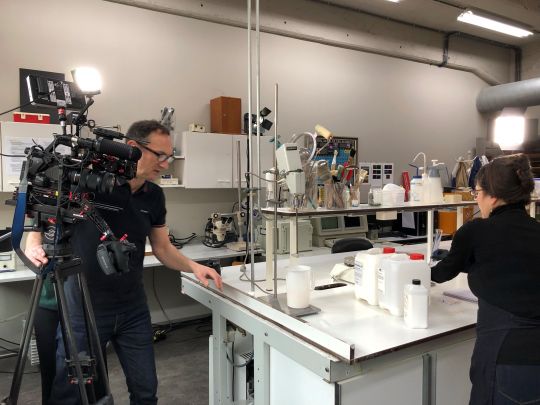 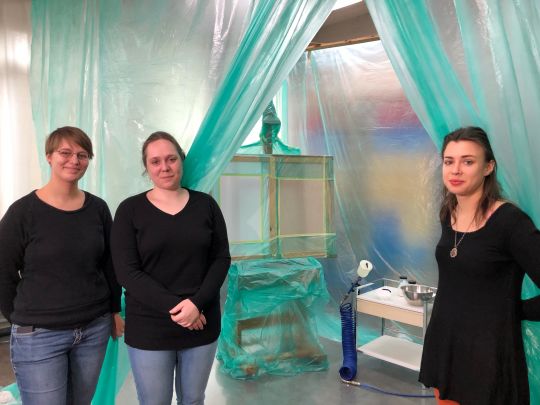 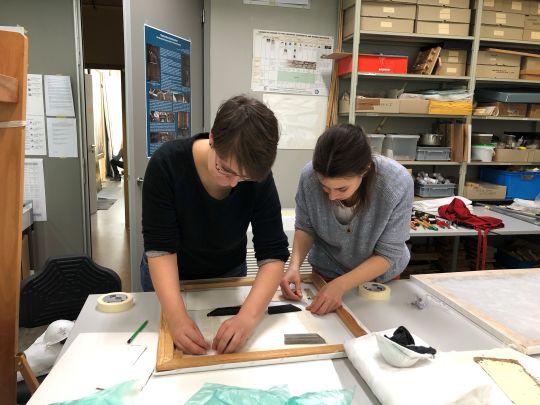 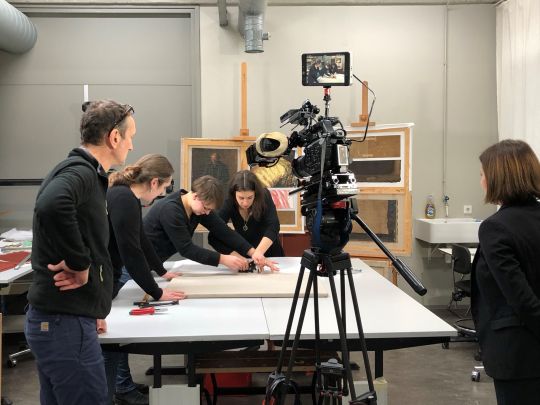 Caption 2: (LtoR) Charlotte Hagedorn, Lauren te Wolde and Joanna Strombek in front of the spray ‘tent’ preparing to apply the adhesive to the lining canvas. © SRAL

Caption 3: Charlotte Hagedorn and Joanna Strombek masking out the adhesive area for application of the adhesive on the lining canvas.  © SRAL

SRAL is busy preparing for the Mist-Lining Workshop that is part of the Getty Foundation’s Conserving Canvas Imitative.  The workshop takes place between March and July this year. Sixteen trainees from all over the globe, will come to SRAL in March for a plenary session at which they will be introduced to the technique. Two week sessions will be organized for the trainees in smaller groups through the spring/summer. Paintings selected as case studies will be lined during these practical sessions.

The trainees are mid career conservators, all interested in the structural repair of canvas paintings,  from around the world. By selecting trainees from different countries, SRAL hopes ultimately to provide a wider network of practicing conservators who are confident to carry out this minimalist lining technique. trainees will come from as far afield as Chile, Australia, Canada, India, Russia and the USA. European conservators will also be able to spread the knowledge gained to colleagues in Italy, Spain, Czechoslovakia, Slovenia, Poland, UK, Sweden, Germany and The Netherlands.

This week preparation for the workshop began with the SRAL team making demonstration mock-ups for the plenary session. Lining canvases were stretched and made ready for spraying the acrylic dispersion adhesive. The lining adhesive is sprayed onto the canvas so a nap bond can be created under low pressure. No heat is used as the adhesive is regenerated from the dry state using solvents.

The workshop will be filmed and a handbook produced. Filming by Big Eye Productions (Ben Brack and Akkie Brack-Sewalt) began this week documenting each stage of the preparation.

The SRAL team is assisted by