Side panels of the Saint Joseph altarpiece in the Museum Gouda

Nearly thirty years ago, the Museum Gouda began the restoration of a number of 16th-century altarpieces. One by one, the altar pieces that previously had survived the Iconoclasm in the St. John's Church in 1572, were restored. Of all the paintings two altar wings of the Saint Joseph altarpiece were still in need of restoration. These side panels depict the Adoration of the Shepherds and the Adoration of the Magi and have most likely been painted by the local artist Michael Claesz. During the restoration, a monogram was discovered that in fact points to this artist. The exterior shutters show the Engagement of Joseph and Mary. However, the identity of this artist is still unknown. The condition of the 450 year old paintings was very bad. The planks of the panels were loose and the paint layers had been severly damaged during previous cleaning treatments. The restoration of this artwork was carried out in the public restoration studio of SRAL in the nearby Bonnefanten Museum and could be followed live. In May 2013, the pieces were officially unveiled and presented to the public at the Museum Gouda, where they were reunited with the previously treated middle panel. 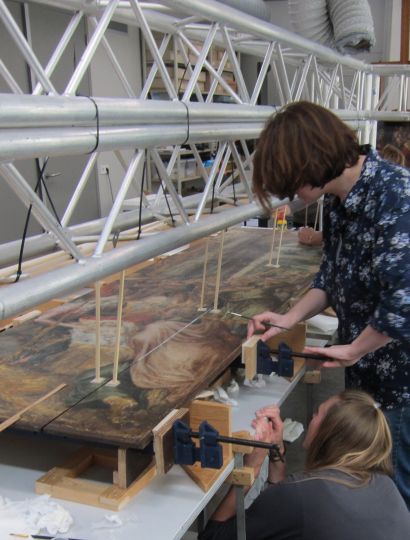