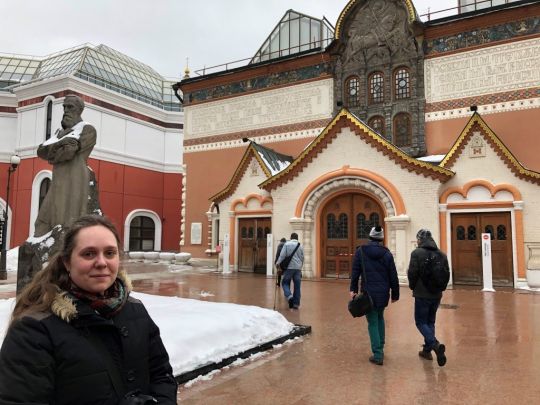 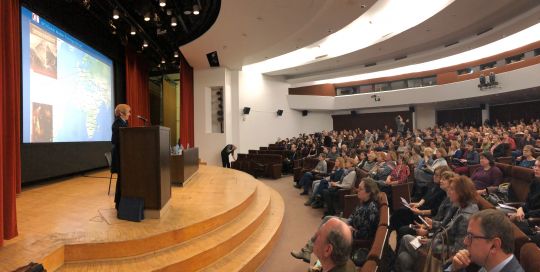 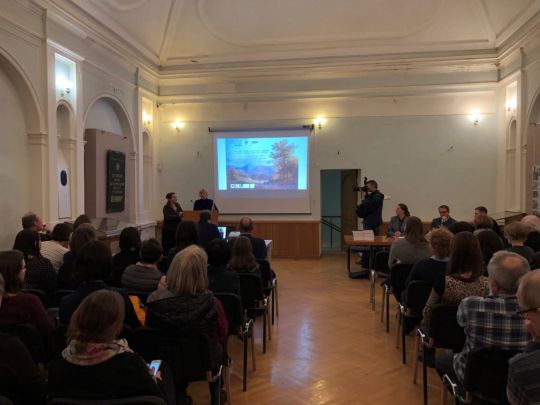 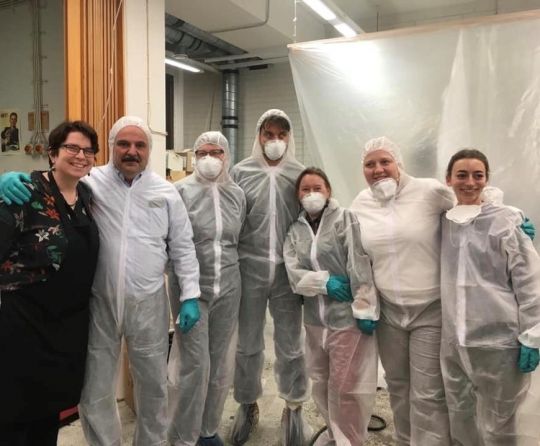 In collaboration with Stichting Cultuur Inventarisatie (SCI)  and the Rijksdienst voor Culturele Erfgoed (RCE), the Stichting Restauratie Atelier Limburg (SRAL) was invited to participate in a conference and workshop on Mist-Lining at the Tretyakov Gallery in Moscow, Russia. The event was sponsored by the Netherlands Embassy for the Russian Federation and Shell, Russia, with materials for the workshop being provided by Evgeniy Kulikovskiy,  (Eterna) St. Petersburg. A parallel workshop was also organised on Paper Identification given by Prof. Dr. Bas van Velzen from the University of Amsterdam. Kate Seymour was assisted by Lauren ten Wolde.

An open lecture day was held on Monday 25th February in the lecture hall of the Tretyakov Gallery. The day was attended by around 250-275 delegates representing over 80 Russian institutions. (Registrations for this day totalled over 400). Introductions were made by Ms Zelfira Tregulova, Director, Tretyakov Gallery and Ms. Tatyana Gorodkova, Chief Curator, Tretyakov Gallery, and Ms. Dominique Kuhling, Deputy Head of Mission, Netherlands Embassy Moscow (on behalf off Ms. Renée Jones-Bos, Netherlands Ambassador). Speakers at the event were Ms. Lia Gorter (SCI) on ‘Dissemination and Publications’, Prof. Dr. Bas van Velzen (University of Amsterdam) on ‘Between the Felt and Wire’, and Ms. Kate Seymour (SRAL) on ‘Demystifing Mist-Lining’. The day ended with a lively and informative question session.

The rest of the week consisted of a four day workshop on Mist-Lining attended by around 30 participants. The majority of the major Moscow museums and cultural centres sent representatives. These included members of the Tretyakov Conservation Departments of Paintings, Modern Art, and Scientific Investigation, as well as participants from GOSNIIR (State Russian Conservation Department), the Pushkin Museum, GRABAR (Art Conservation Centre of the Russian Federation), Kremlin Museums, and Museums of the City of Moscow. Many institutions sent different representatives on different days, which meant that information needed to be compartmentalised and repeated on a daily basis.

The SRAL Mist-Lining Technique was described and demonstrated as a step by step process. Different canvas types (linen, polyester Trevira CS, and non-woven polyester (as interleaf)) were  stretched and sanded to increase nap. A number of mock paintings were selected from the store of old lining canvases at the Tretyakov. These mostly contained remnants of old animal glue lining adhesive residues. The lining adhesive, a mixture of Plextol K360 (pH adjusted to 7) and Plextol D498 (ratio 70:30) were made and sprayed in a pre-made spray temporary cabin onto the stretched, prepared canvases. A low pressure envelope was constructed by the participants with instruction from the teachers. The mock paintings were lined on the penultimate day and the linings were evaluated on the final day. The workshop ended with a question and answer session. Kate Seymour was assisted by Lauren ten Wolde throughout the four days. The assistance of Lauren was much valued and appreciated. Participants were helped at each stage by both Kate and Lauren.

Additional visits were made during the week by Lia Gorter, Bas van Velzen, Lauren ten Wolde and Kate Seymour to a number of local institutions in Moscow. These included the GOSNIIR State Conservation Institute and the Paper Conservation Department at The Pushkin Museum conservation department. The 2015 Omsk workshop bundle of papers resulting from workshops at the M.A Vrubel Museum published by SCI were presented on Thursday 28th February to a packed room at GOSNIIR. Contributions in this publication were made by Kate Seymour on Mist-Lining and Tear Mending. Mr. Pavel Kouzmine (The Netherlands Embassy) was presented with a medal of honour by SCI Director Lia Gorter for his support of Dutch art in Russia during the week at the book presentation at GOSNIIR.

This conference and workshop is the third of such, the first being on Varnishes (2017), the second being on Gels and Cleaning surfaces (2018). The collaboration will hopefully with future events held on a yearly basis for the next few years. Discussion on next year’s (2020) topic was initiated  by the Tretyakov Easel Painting’s Conservation team with the desire to focus on consolidation. Finally a bit thank you to the State Tretyakov Gallery for their continued partnership with SRAL.

The Mist-Lining film, a product of the 2019 Mist-Lining Workshop supported by Getty Foundation's Conserving Canvas Initiative is now online